A Pioneer in Facial Plastic Surgery

Dr. Langsdon developed techniques that revolutionized contouring improvements in saggy necks. He has continually improved his SMMS (or submental muscular medialization and suspension) technique over many years and was the first to publish his technique in 2012, then again in 2013, and once more with statistical results in 2018. Many other leading facelift surgeons have adopted the method throughout the world. He also developed techniques for rhinoplasty procedures, such as a preservation rhinoplasty technique that is specific to enhance natural-looking nose job results involving the tip.

Dr. Langsdon is a pioneer in facial plastic surgery. He developed techniques which revolutionized contouring improvements in saggy necks. He has continually improved his SMMS (or submental muscular medialization and suspension) technique over many years and was the first to publish his technique in 2012, then again in 2013 and with statistical results in 2018. The technique has been adopted by many other leading facelift surgeons throughout the world. He also developed techniques for rhinoplasty procedures such as a preservation rhinoplasty technique that is specific to enhance natural looking nose job results involving the tip.

Dr. Langsdon began his higher education by obtaining his B.S. in Biology from the University of North Alabama and his medical degree from the University of Arkansas for Medical Sciences. While in medical school, he was awarded The Medical Student Research Fellowship, The March of Dimes Medical Student Research Fellowship, and The Summer Oncology Fellowship. He was named the Barton Scholar upon graduation.

He knew early on that he wanted to specialize in plastic surgery of the face. He first trained in Otolaryngology-Head & Neck Surgery at Indiana University, a program well known for teaching rhinoplasty, facelift, and other facial aesthetic procedures as well as head & neck cancer and reconstructive surgery. He was accepted for advanced training and then underwent a year-long Fellowship devoted exclusively to cosmetic surgery of the face through the American Academy of Facial Plastic and Reconstructive Surgery www.aafprs.org. After this extensive and focused training, Dr. Langsdon began his practice in Memphis, Tennessee.  He is board-certified by the American Board of Facial Plastic & Reconstructive Surgery www.abfprs.org.

Dr. Langsdon’s career has been focused entirely on Facial Plastic Surgery and he has dedicated himself to the pursuit of excellence in this field:

*He served as a Professor with the University of Tennessee for over two and a half decades and runs a private Facial Plastic Surgery clinic (The Langsdon Clinic).

*As a frequent lecturer throughout the U.S. on the topics of facial plastic surgery, Dr. Langsdon has given well over 300 medical lectures.

*He has over 40 publications, authoring several medical articles, book chapters, and a medical textbook.

*He has been selected for inclusion in the Best Doctors in America list by Woodward/White, Inc., the Guide to Americas’ Top Physicians by Consumer’s Research Council of America, Top Doctors in Delta Sky Magazine, and Best Cosmetic Surgery, as well as Best Medical Spa by the Memphis Commercial Appeal newspaper for several years.

Dr. Langsdon is an active volunteer in many church, civic and professional organization programs. He has served in a medical mission to the nation of Haiti, and he has actively and financially supported patient care and education programs for that country. Dr. Langsdon also helps the underserved in the Mid South by providing pro bono reconstructive facial plastic surgical service for the working poor through the Memphis Church Health Center’s volunteer surgical subspecialty service program. In addition, he has spent thousands of hours teaching medical residents in training as well as young doctors specializing in facial plastic surgery.

On a national level, Dr. Langsdon has served on many committees of the American Academy of Facial Plastic & Reconstructive Surgery (AAFPRS) and served as the 2018-2019 President of the organization. He has served in leadership positions as committee chairs, as a member of the AAFPRS board of directors from 2015-2017 and as the national Fall Meeting Program Chair from 2016 through 2018. Through the program chair position, he has planned, organized, and overseen this national medical education program for the entire AAFPRS organization, that provides Accreditation Council on Continuing Medical Education (ACCME) credits (CME) for those physicians specializing in Facial Plastic Surgery. 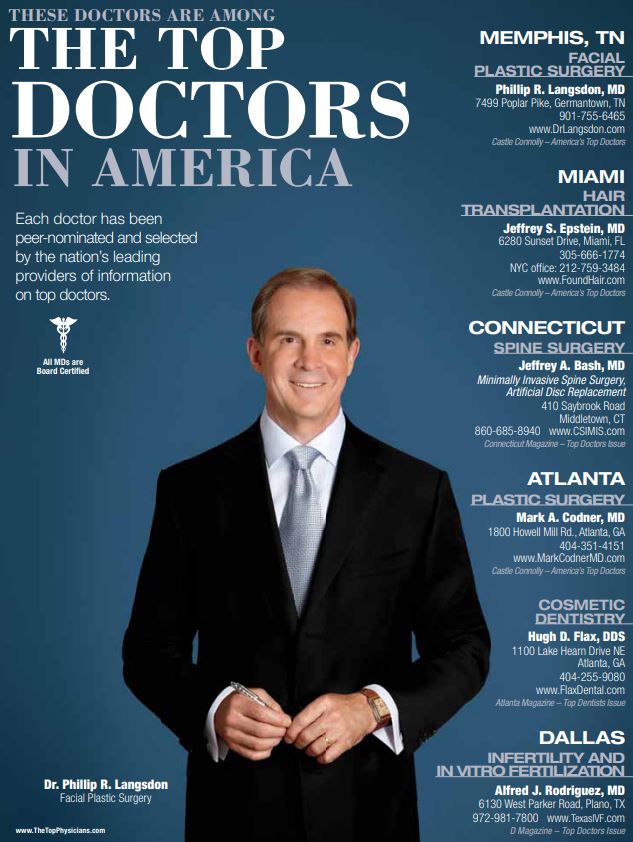 These programs are national symposiums in which doctors exchange the latest information regarding the standard of care, surgical techniques, and new developments in facial plastic and reconstructive surgery, as well as non-surgical facial aesthetic procedures and technology. Dr. Langsdon also directs an AAFPRS sponsored fellowship training program for young doctors who spend an additional year assisting Dr. Langsdon as they learn to specialize in facial plastic surgery.

Dr. Langsdon is a past fellow of the American College of Surgeons and a fellow of the American Academy of Facial Plastic and Reconstructive Surgery. He is a member of the Tennessee Medical Association and the Memphis Medical Society. He served as vice-president of the Memphis Medical Society through 2017 and as president in 2018. His practice is limited to Facial Plastic Surgery. Dr. Langsdon has been in practice in Memphis since 1986.

Doctor Langsdon is a sub-specialized facial plastic surgeon and one of the best facelift surgeons in the world. He specializes in the deep plane facelift and multiple types of facelifts that provide natural looking results, without the need for general gas anesthesia. He has performed thousands of procedures and patients come from not only the region, but all over the U.S., Europe, Asia, Australia, New Zealand. He is a published author, innovator and inventor in facelift and neck lift techniques that have that set a standard that many leading facelift surgeons have adopted. He has presented his techniques to doctors from all over the U.S. and world in over 300 speaking appearances and has trained over 90 doctors in facelifting techniques at his facility in Germantown/Memphis, Tennessee. Board-certified facial plastic surgeon Dr. Phillip R. Langsdon is the only surgeon in the Mid-South whose practice is limited to and specialized in cosmetic surgery of the face, nose, eyes, head, and neck. A former President of the American Academy of Facial Plastic and Reconstructive Surgery, Dr. Langsdon has earned unprecedented recognition and praise as the best facelift surgeon in America and the best rhinoplasty surgeon in America.

Dr. Phillip Langsdon is one of the best rhinoplasty (nose job) surgeons in the USA and the world. He utilizes his “preservation” method, which is designed to provide a natural-appearing nose that avoids that “done” or “overdone” look that often occurs from removing too much cartilage/bone. Dr. Langsdon has refined his techniques from over two and a half decades and thousands of surgical procedures. Many patients make the comment that their nose looks so natural that others cannot tell they have had surgery.

He has appeared nationally on the NBC Today show to discuss rhinoplasty and has been listed in Best Doctors in America as well as Top Doctors in Delta Sky Magazine. He has given hundreds of rhinoplasty presentations at medical meetings and has spoken at national and international meetings to discuss his rhinoplasty approaches and techniques designed to achieve natural and unoperated results. He invented and was the first to publish his new technique on tip rotation and refinement, called Lateral Crural Setback maneuver. Additionally, Dr. Langsdon has been a leader, serving as national President in the field that was founded upon rhinoplasty, The American Academy of Facial Plastic & Reconstructive Surgery (serving 2018-2019).

Dr. Langsdon specializes in both the “open” and “closed” rhinoplasty approaches. In fact, he is among the very few specialists worldwide who are experts with both techniques are. Not only do patients travel from all over the U.S. to have rhinoplasty, but they also come for revision rhinoplasty with Dr. Langsdon.

He also specializes in all ethnic types of rhinoplasty and is careful to create beautiful outcomes while maintaining ethnic characteristics with natural-looking results. Patients can view the potential changes on a 3D computer imager before surgery so that both Dr. Langsdon and each patient can decide on the surgical objectives.

Each patient is provided individual attention. Our facility is limited to nasal (rhinoplasty/nose job surgery, revision rhinoplasty) and facial plastic surgery (facelift/deep plane facelift and eyelid surgery). Our on-site, state of Tennessee Department of Health licensed surgical facility provides private and personal attention with a staff that works full time only on rhinoplasty and facial plastic surgery cases. This provides the highest level of privacy, efficiency, and personal care.

Additionally, Dr. Langsdon avoids nasal packing by taking the time with each patient to use a special internal absorbable suture techniques that improves post-op comfort and reduces swelling and bruising.

Our patients are from all across the U.S. and from Europe, Australia, South America, Puerto Rico, and Asia and come to Memphis/Germantown to have primary or revision rhinoplasty with Dr. Langsdon.